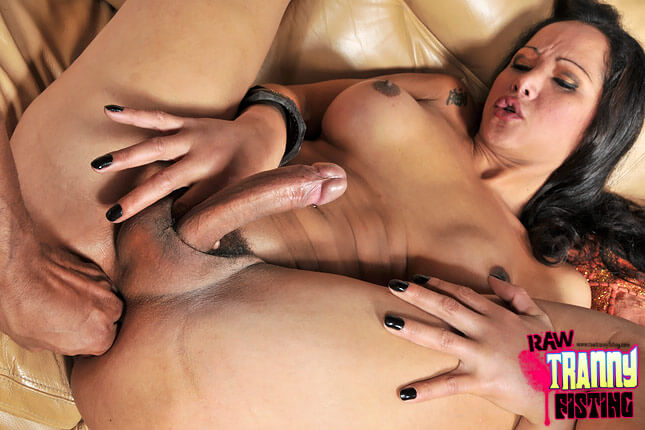 Sexy Tranny Lorraine Gets Full Fist Up Her Asshole!
Smoking-hot tranny, Lorraine Baldez is a busty bitch with a wonderful big bootie. Alex sucks her tits while working his greasy fingers in her asshole. He manages to fit his entire fucking fist up her rectum and then pulls it out, admiring that sexy gaping ass. He squeezes his cock tight and dunks it in Lorraine’s wet mouth. Now Alex is all hard and ready to go. He positions Lorraine in doggy-style and slams that tight, pretty asshole!
Tasty Tranny Ana Gets Finger-blasted by Her Man!
This scene roars out the gate with Capoeira already exploring all the kinky shemale pleasures that Ana Paula Oliveira has to offer! With his middle finger sunk in her tight bunghole KNUCKLES DEEP, our boy is already dead-set on fisting that luscious ass to the max! Once he stretches out her shithole, he takes a break and feeds Ana his fuckstick. Clamping his mitts on her head, he face-fucks our striking tranny as she strokes her long lady dong. After strapping on a jimmy hat, he drills her wet starfish in doggy-style! And I haven’t even got to the best part yet! RAW ANAL FISTING!
Tranny Camilly Zanini and the Fucking Fist of Fury!
Camilly Zanini looks like a shemale barbie doll with her radiant blond hair with even little pink flowers adorning her ear. Clad in tempting lingerie, complete with a scandalous hot pink miniskirt, it’s no wonder Capoeira is attacking her like a bitch in heat! He immediately bends her over to get a gander at her ass crack. She lets out an unexpected yelp as he curls a finger inside her juicy balloon knot. After she’s passed her tight asshole inspection, Camilly goes right to the furious cock-sucking on Capoeira’s brown wanger. See him loosen up that keyhole of a butt with some powerhouse fucking in doggy. After he’s demolished it, see him fist fuck our screaming tranny to no end!
Blond Tranny Jessica Barely Fisted She’s So Tight!
Andre Garcia has landed himself one smoking hot tranny bitch! Jessica Kathleen is a stone cold fox with a decent rack and a nice, round bootie to fuck AND fist! Things kick off with a thrilling blow job where Jessica sucks Andre’s cock and keeps going like the goddamn energizer bunny. Props to her dick-sucking endurance! At the same time, Andre is poking his fingers in her butt hole, starting with just one and then two, and then three… But before the fisting madness begins, he fucks her viciously hard doggy-style as she jacks off her lady cock. Andre barely fits his entire hand up her bung, that just goes to show you how tight she is!
Tranny Jade Gets Her Tight Bunghole Fisted to All Hell!
Today’s tranny treat comes in the staggeringly beautiful Jade Oliveria. With her mammoth tits and trim, athletic body, what is NOT to love seriously?! She goes down on him like a good obedient bitch, lapping his shaft and nibbling on his beanbag. During one of her deep-throats, Paulo plugs her nose and sees how long she can stay down on his prick. Next, he takes his crooked pecker and slams it roughly in Jade’s keyhole of a bung. Goddamn, that’s gotta be a tight fucking fit because he’s got this beauty yelping. But that’s just to loosen her goose for when Paulo fists her asshole like a medieval battering ram!
Stacked Brunette Tranny Takes A Fist Up Her Butt!
Despite her impressive height, gorgeous brunette tranny, Cybelle Callmon is a complete submissive! She will let her man do anything he wants to her – and that includes fisting her right up to somewhere left of her navel! The scene starts off tame enough, with the stacked she-male kissing her man and then going down on him with her expert dick-sucking lips. Rick Montilla nails her doggy-style, but when he starts to feel himself about to cum early – the shemale has got an extremely tight ass – the man pulls out, donning a rubber glove and really getting down to business. The shemale moans and squeals as the stud inserts all of his fingers and finally his whole hand in to her butt!
Beautiful She-male Gets Entire Fist Up Her Ass!
Alana Ferreira is one screaming-hot slut with nuts! Matheus tears off her clothes in a matter of seconds, taking precious seconds to suckle on her bodacious tits. She rewards our man by swallowing down on his thick wick. Then, after all favors are paid, she plops down on his rod reverse-cowgirl and pounds herself out! She takes a couple breathers, her tight asshole makes Matheus want to pop so freaking bad. Now for the moment you’ve been waiting for – the extreme tranny fisting bonanza! Matheus gingerly stuffs his entire fucking hand in that she-male bung! Told ya that asshole was tight!

This entry was posted on 09.08.2013, 6:58 pm and is filed under SheMale | Tranny SiteRips. You can follow any responses to this entry through RSS 2.0. Both comments and pings are currently closed.